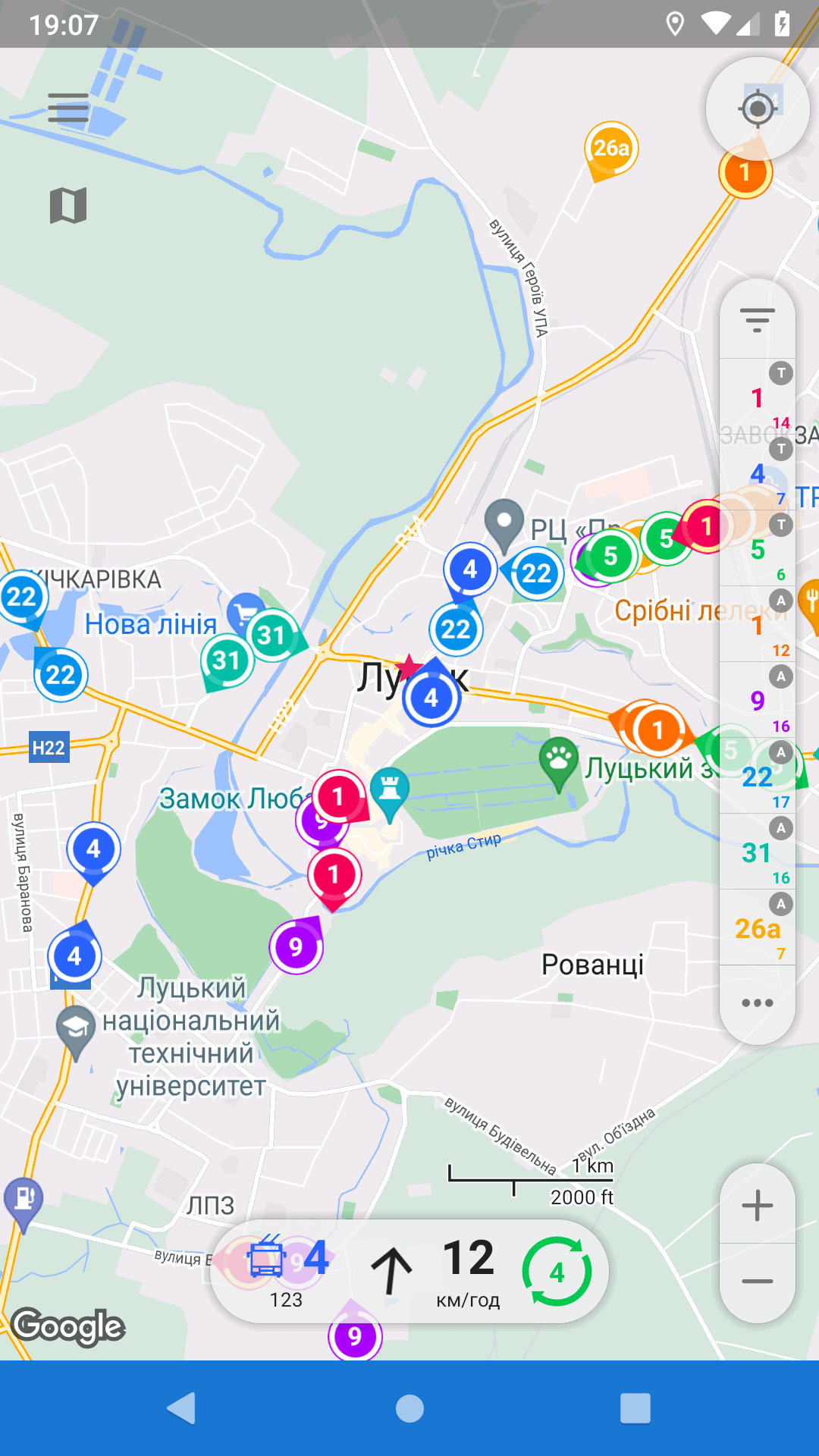 Primary screen is a map with colored vehicle markers. If there are no markers on the map, this may indicate a lack of network connection, unavailability of the city service that provides GPS data, or the fact that there currently are not any transport with GPS-trackers enabled on active routes. These are the most common reasons that do not depend on the application.

If you click on the transport marker, a block of information appears at the bottom of the screen, containing the type of transport and route number, license plates, direction, speed and time from the moment the data was received from the vehicle (depending on how long the data has not been updated, the color of the numbers and update icon changes).

A short tap on the information block activates the tracking mode for the selected vehicle, the function of which is to periodically move the center of the map to the last known location of the vehicle.

A long tap on the information block displays a window with detailed information about the route. 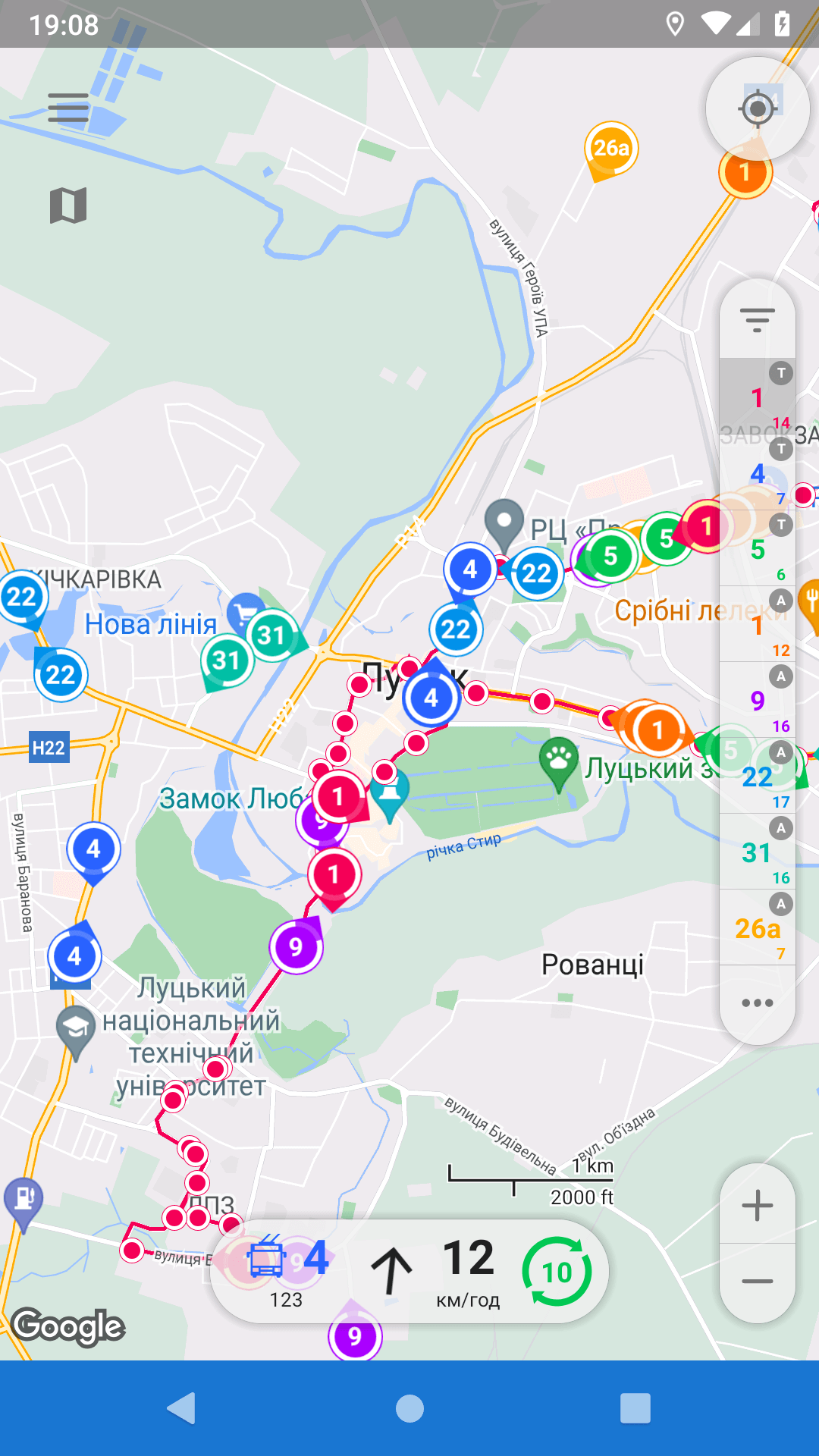 Along the right side of the primary screen there is a list of active routes. A short tap on a list item will highlight it and display the path and stops of the route on the map, a long one will display a window with detailed information about the route.

At the bottom of the list there is a fixed button [···], a short tap on which opens a quick route selection window, a long one - favourite routes and stops.

The [My Location] button in the upper right corner of the screen apart from the usual function also has an auxiliary one - long press on it opens the screen with stops nearby. 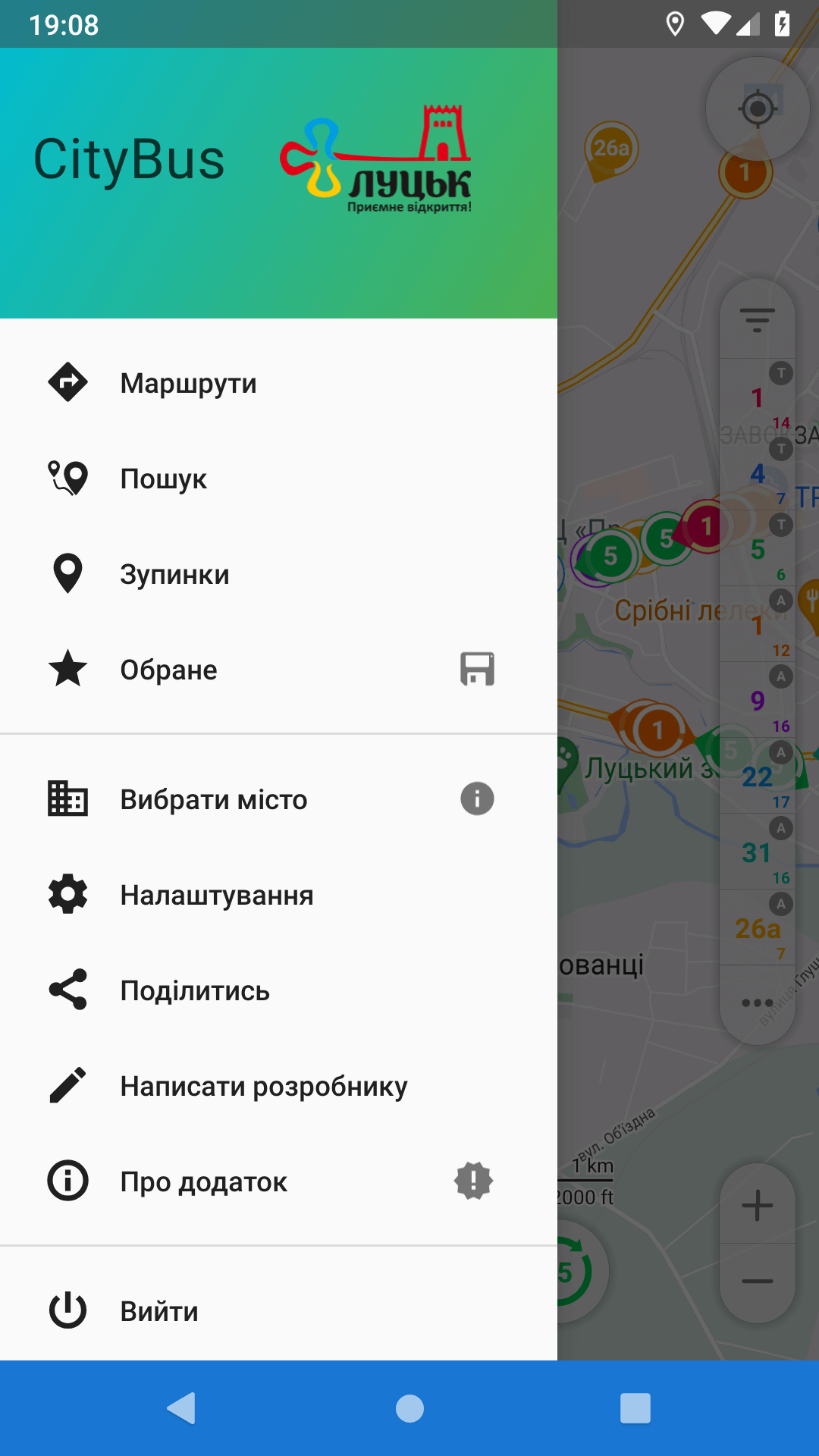 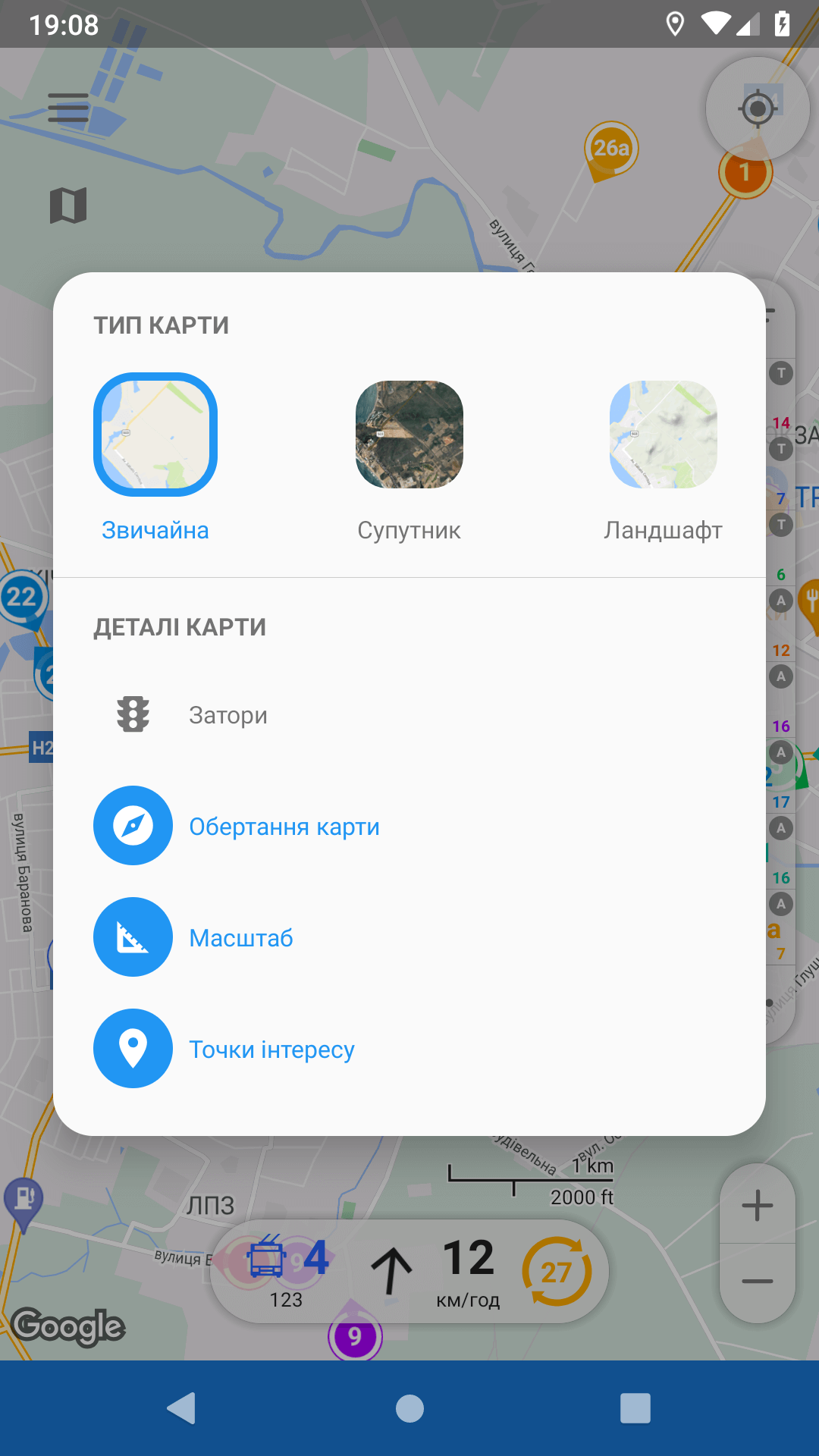 The hamburger button calls up the main menu. Another way to open it is to swipe to the right of the left edge of the screen. The menu gives access to auxiliary functions of the app: [Routes], [Stops], [Search], [Favorites] (this item also contains a button to save the current list of active routes to Favorites), [Preferences], [Contact developer] and others.

Below the menu button there is a button for adjusting the map parameters (selecting the type of map; switches to show traffic, map rotation, scale ruler, points of interest) 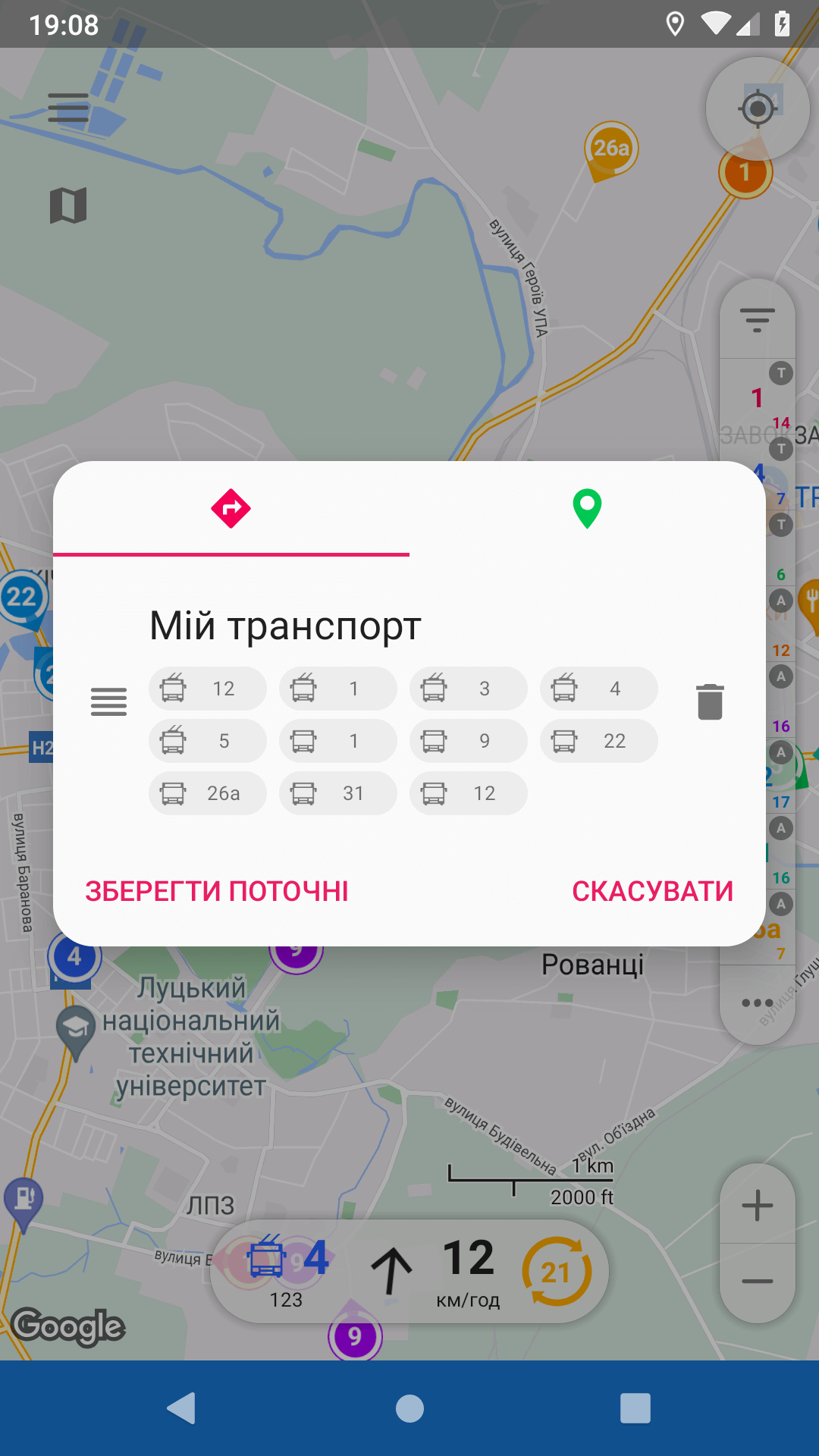 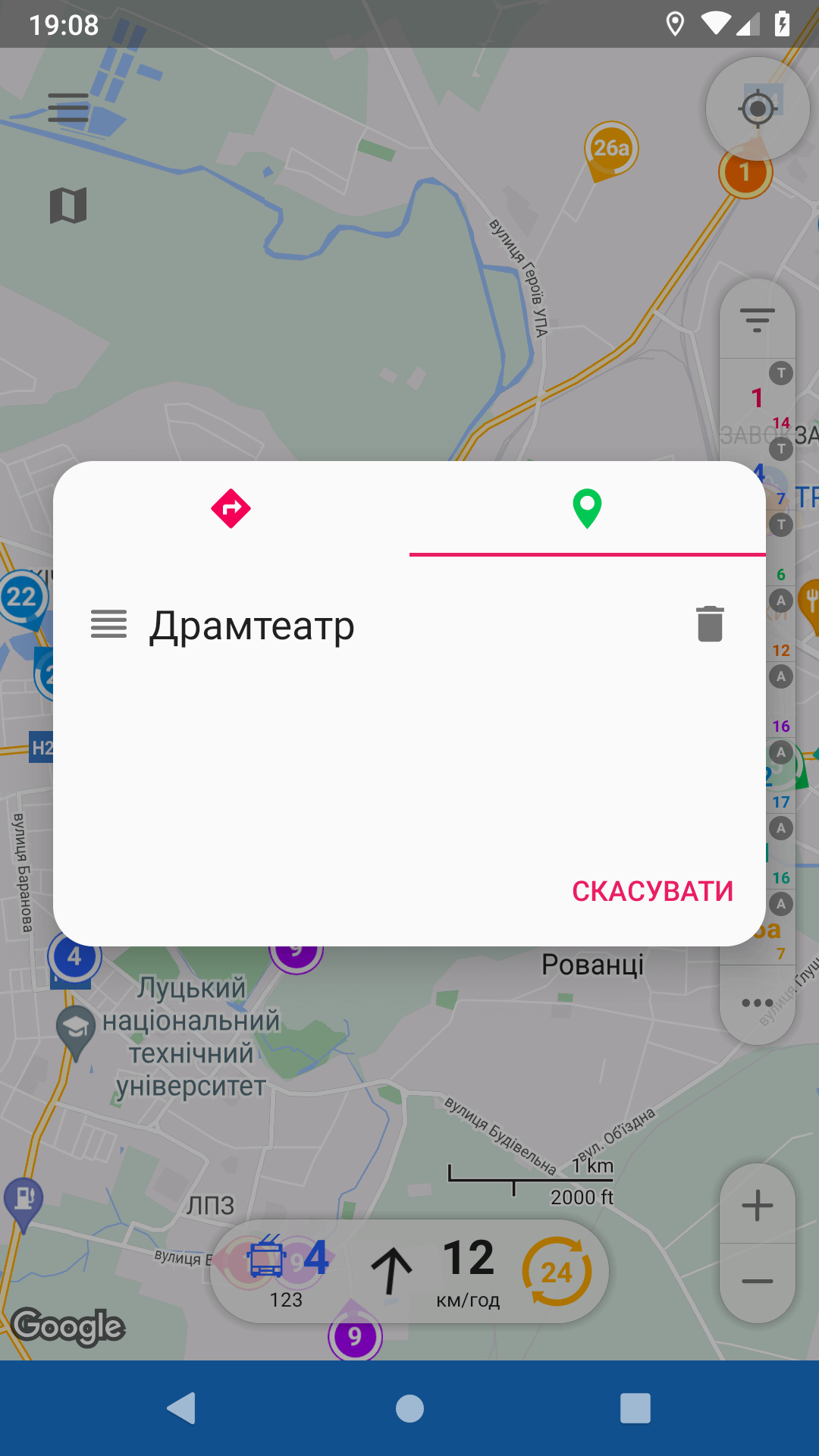 The button with the floppy disk icon in the main menu allows you to save a set of currently active routes and give this set a name. The saved set of routes can be quickly applied to be shown on the map. It can also be applied in part by unchecking individual routes. 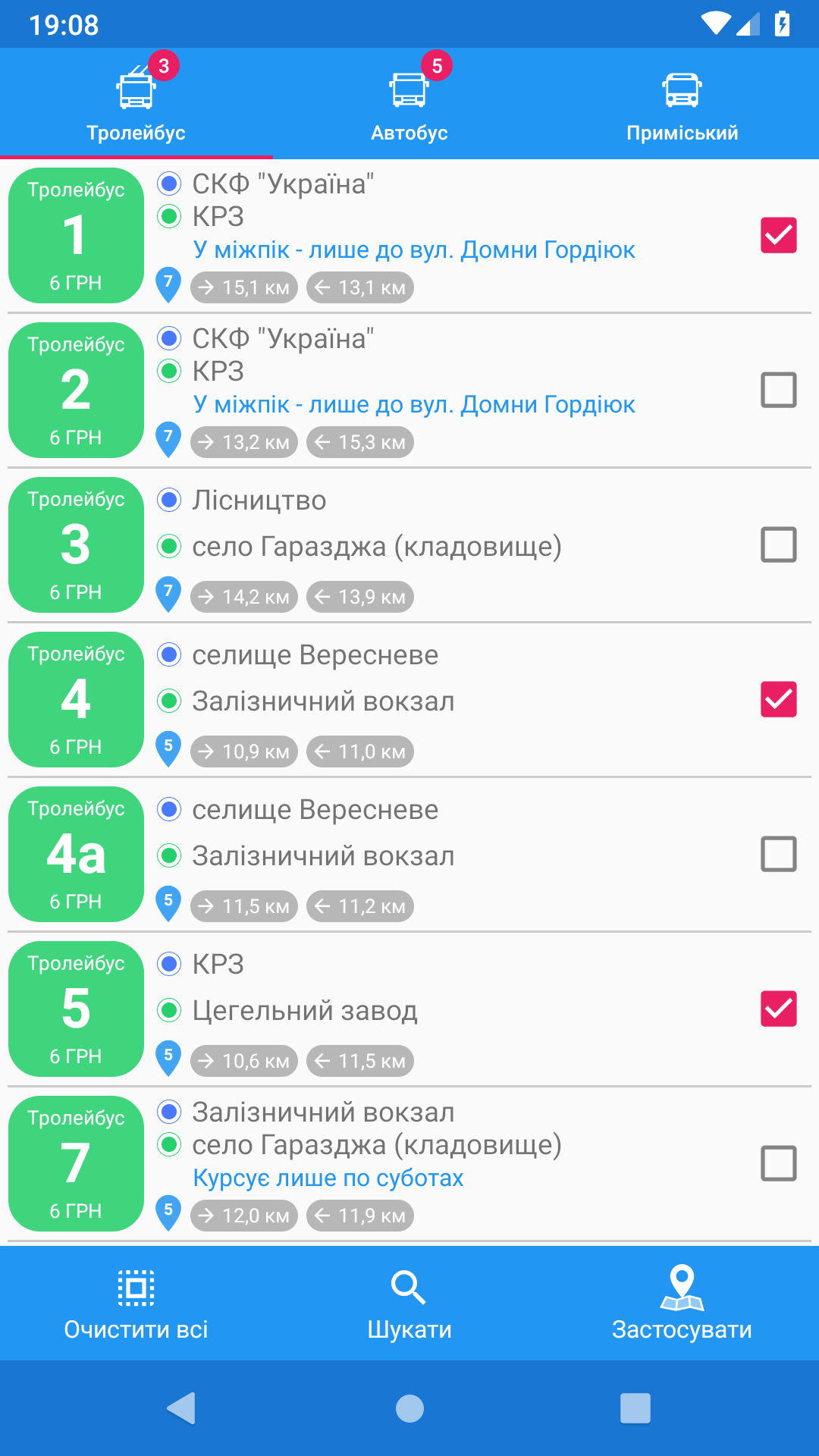 All routes are divided into tabs with separate lists according to transport types. Clicking on the list item will display a window with detailed information about the route, a list of stops and a map with the location of stops and the designation of paths (in both forward and reverse directions). This screen allows you to select active routes to track - you need to mark the desired items and confirm selection by pressing [Apply] button.

You can mark all routes in the current list (or remove marks) by pressing the [Check/Clear All] button.

The [Search] button will help you navigate to the route search screen for finding routes between two points. 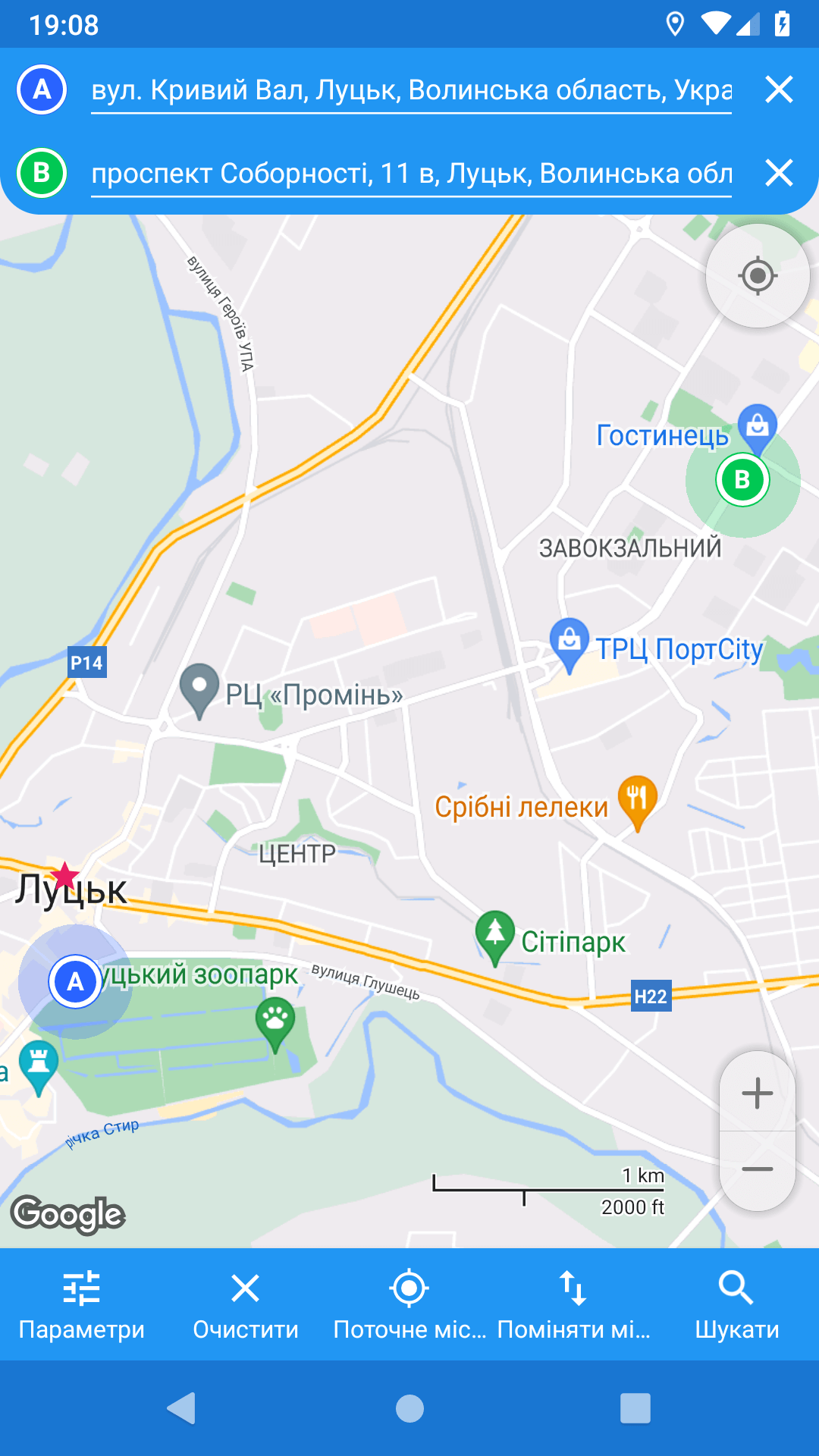 To find routes, you must specify departure and arrival points. You can do this by specifying their location on the map, or by partially entering the address (at least 4 letters) of the point in the corresponding field and then selecting from drop-down prompts. Points on the map can be moved (long press) or deleted (cross-button next to the address field).

Use the buttons in the bottom panel to set additional search [Options], [Clear] all points, set [Current Location] as one of the points, [Swap] departure and arrival points.

To perform a search press [Find] button after selecting both points 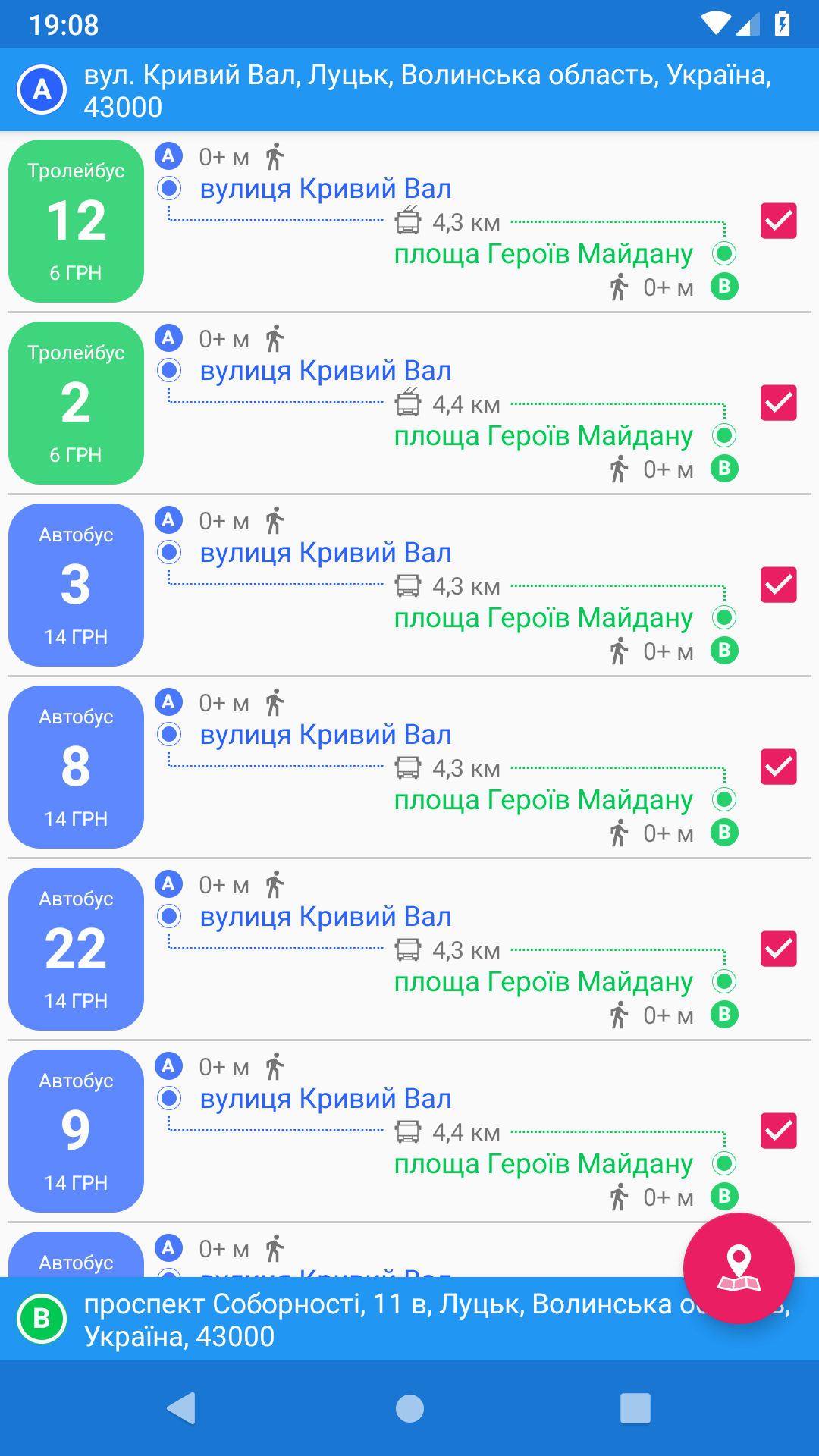 The application searches for stops near the points specified in the previous step (according to the radius selected in the search options). If fewer than two direct routes through these stops are found, transfer options will also be added to the search results.

A tap on a block with a route number displays a window with detailed information about the route. A tap on the middle part of one of the results will show a map with a directions scheme from point A to point B.

Round red button in the lower right corner of the screen is used to navigate to the primary screen of the app, at the same time the routes in the checked search results will be set as active. 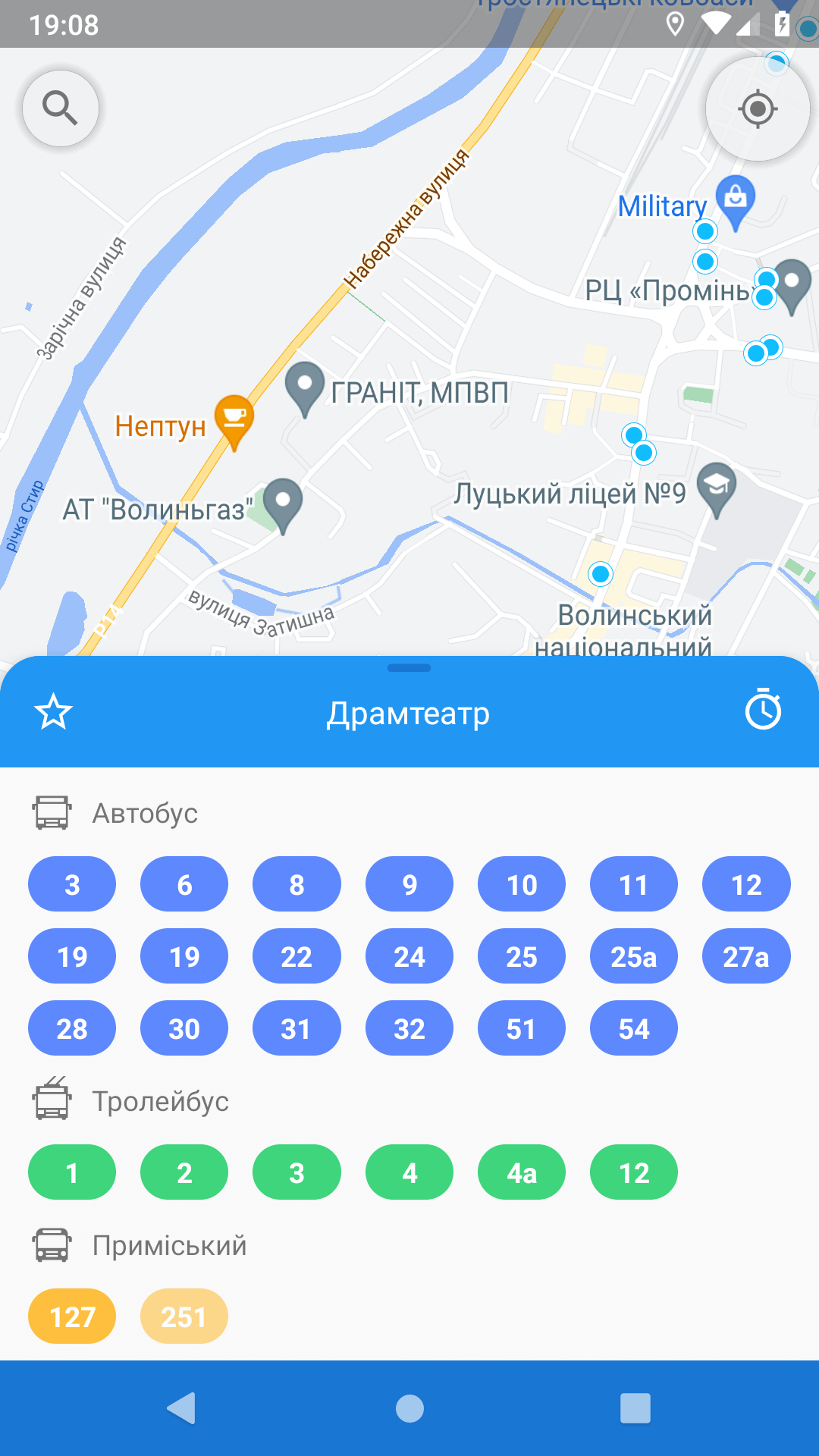 This screen contains a map with all the stops available in the app. Depending on the scale, stop markers may be combined into groups (markers with numbers, that correspond to the approximate number of stops in the group). To see individual stops, you need to zoom in the map or click on the group marker.

If you click on the stop marker, a panel with the name of the stop will appear at the bottom of the screen. The panel can be pulled up to see a list of routes passing through the stop.

On the left side of the panel there is a button for adding a stop to [Favorites], on the right - to navigate to [Smart stop] screen 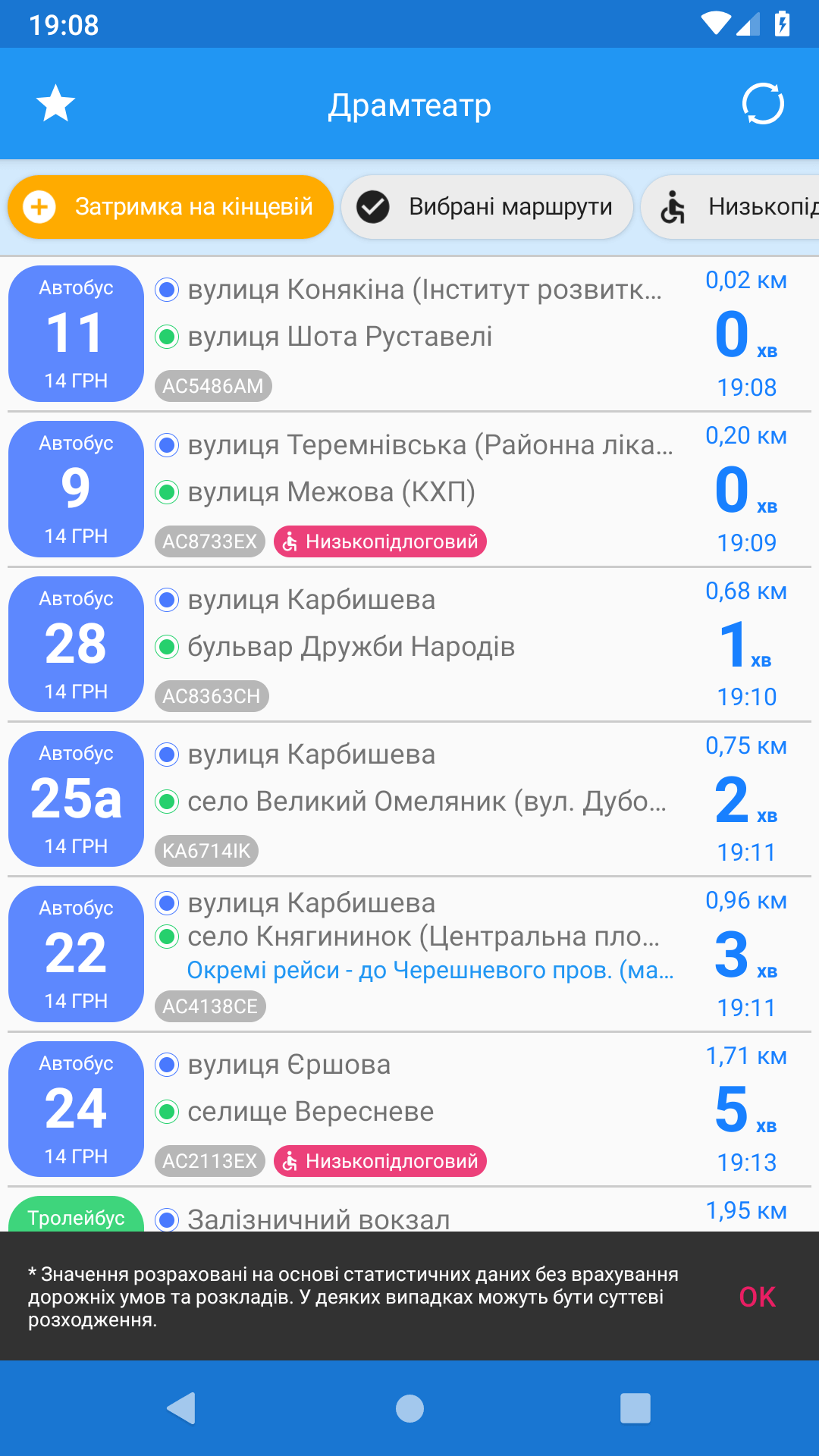 For most of the stops it is possible to calculate the estimated time of arrival of transport. Depending on the relevance of the information and the current discrepancies between the calculated values and the real ones, the predicted values ​​ can change color from green (minimal differences) to red (real time of arrival can differ significantly from the predicted one).

The predicted values ​​are calculated based on the average speed and do not take into account the road conditions. There may be significant differences in some areas (such as fast streets or highways). 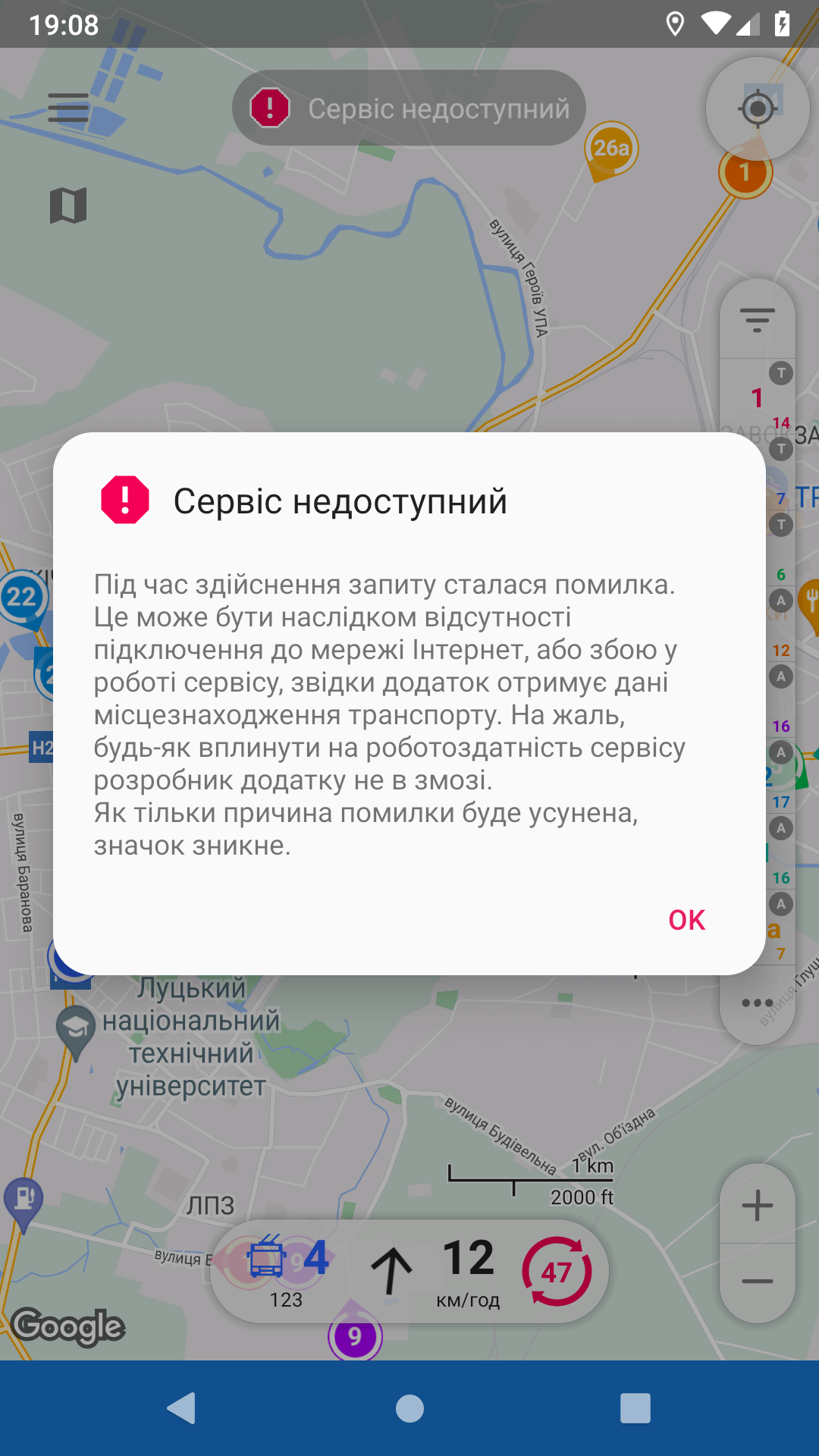 Occasionally, various indicator buttons may appear at the top of the screen. Their appearance informs about the current status of the application - for example, problems with access to the service, where the application gets transport location data, the lack of up-to-date data for selected routes, or updates availability. To find out what a particular indicator means, just click on it.

To correctly exit the application, just press the [Back] button twice while on the primary screen. The same action is performed by the main menu item [Exit] 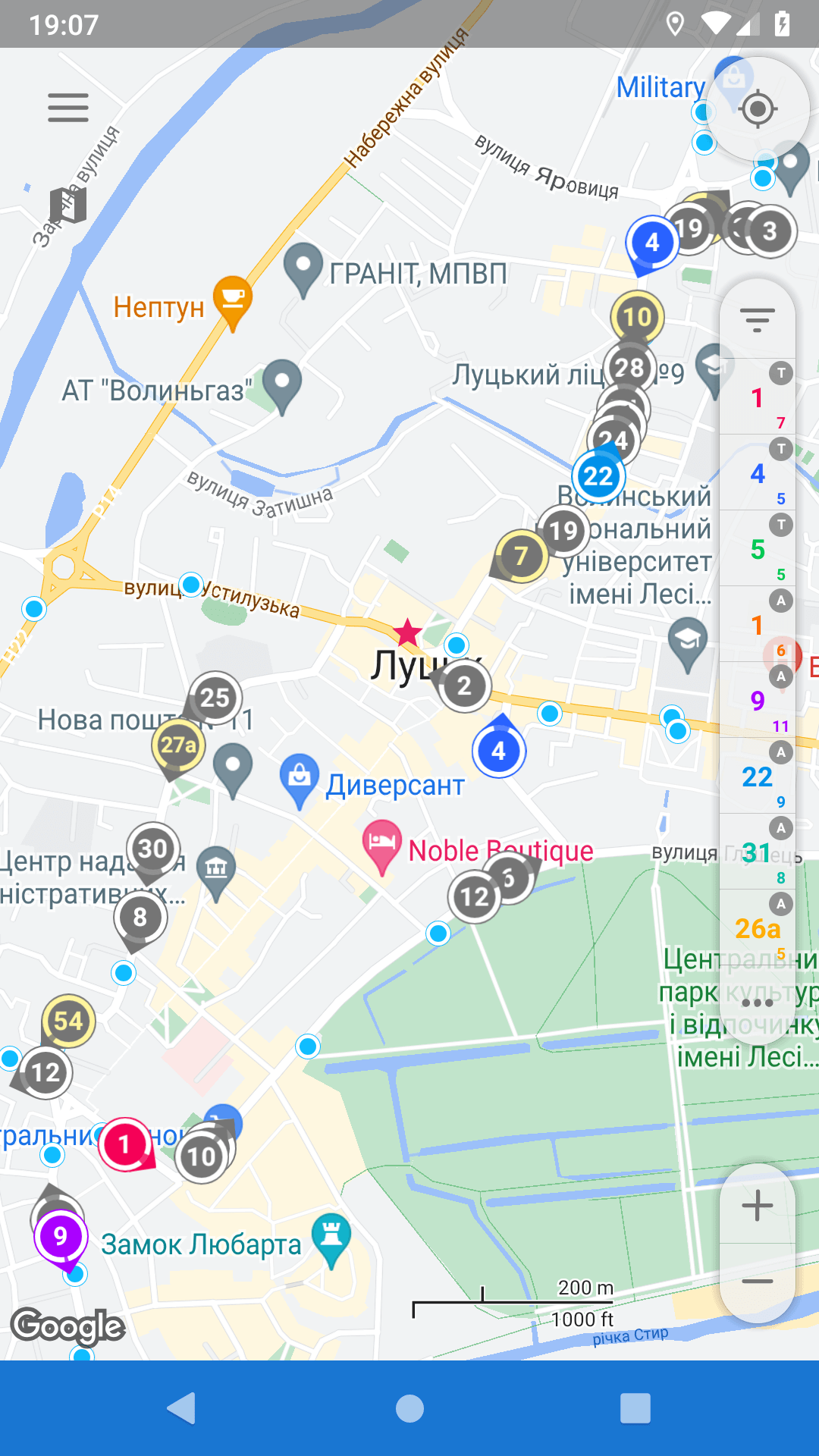 You shouldn't choose all the routes at once, because the more markers on the map, the higher the load on the processor and battery, and the more internet traffic is used. Also markers could overlap each other and interfere with navigating the map. It is enough to select only the routes you need at a given time, and the rest of the transport will appear as you zoom in the map. The zoom level, at which the rest of the transport appear, can be selected in [Preferences], where you can also change the size and appearance of the transport markers and configure many other useful options.

Thanks for the request!